Alberto Biasi (Padua 1937) is an undoubted leader of post-war Italian art history. His is one of the most coherent and authoritative figures at an international level of what in Italy has been defined as “Arte Programmata” or “Arte Cinetica” and, elsewhere, “Optical Art”.

From 1959, the year that the young Biasi had his beginnings in art, unyil today his activity has been consistently based on perceptive inquiries, through series of works each of which has poetically and scientifically dealt with some problems regarding vision: from the first Trame to the famous Torsioni, Light-Prisms, and the Ottico-dinamici.

In 1988 an anthological show was held at the Museo Civico agli Eremitani in Padua. In 2006 he exhibited in the rooms of the Hermitage in Saint Petersburg. Besides the twelve shows with the Gruppo Enne, Biasi has had more than one hundred solo shows in such prestigious venues as Palazzo Ducale in Urbino, the Wigner Institute in Erice, the Barcelona cathedral museum, the Museo Nazionale in Villa Pisani, and the Prague national gallery. He has also taken part in more than five hundred group shows, among which ITALIAN ZERO & avant-garde ‘60s, in the MAMM museum in Moscow, the XXXII and XLII Venice Biennales, the XI Biennale of Sao Paolo, the X, XI, and XLII Rome Quadrennials, and the most famous graphics biennales; he has been awarded many important prizes.

“For some time I had wanted to try out a new material,” says Alberto Biasi. “I had already explored all the potential of PVC, which is also likely to be prohibited by the EU because it is too polluting. I wanted a material that was softer and less plastic. The resistance to the strong tension which the composing lamellas are subjected to was a limit not to be undervalued. I have long been aware of Alcantara and I wanted to try it out. the firm was at once extremely helpful and sent me samples and then cut me lamellas to use in my work. In this way I realised that this material

Go to the press area

is not only soft to see and touch, but also ‘changeable’. I understood the changeability of this material after having had to take apart a prototype because I hadn’t understood why the lamellas were of two different blacks: Alcantara ‘works’ with light according to where you look at it from. This specific aspect of the material very much belongs to me and I like it very much. This is how my latest works and ‘my’ new material came about.” 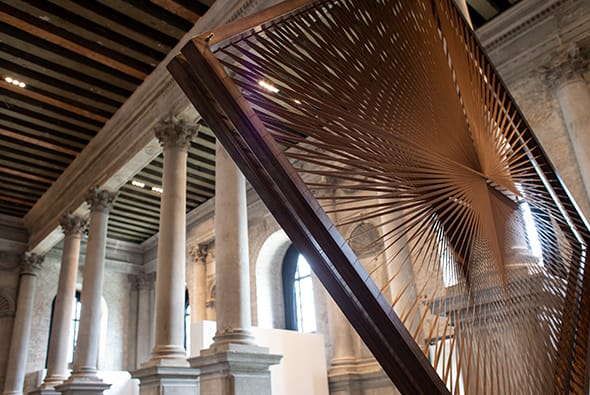